Skip to Content
This post may contain affiliate links which means I receive a small commission at no cost to you when you make a purchase. As an Amazon Associate, I earn from qualifying purchases.
37 shares

“This post, 5 Things No One Told You About Recovering from a C-Section, was written by me through an activation with HireInfluence on behalf of InControl Medical. Although I received compensation for participating in the campaign, all thoughts and opinions are my own.”

Being a first-time mom, I read a ton of pregnancy and baby books while I was pregnant with my son. I thought I was well-versed and prepared for what my body and my baby would bring post-partum, but, girl, was I wrong. You see, I never bargained for a C-section. It just wasn’t part of the plan.

But at almost 38 weeks, the day I left early from work because I felt no movement all day from our little guy, I sensed all my carefully laid plans were about to change. And I was right. After passing a biophysical profile about two weeks prior, his score was only four out of 10 that day. “We’re going to have to prep you for surgery. You need an emergency C-section,” the doctor said.

I was more nervous than I’d ever been in my life. I was worried most of all for our son. I just wanted to hold him and see that he was OK. But I was worried for me, too. I’d never had surgery, and although several of my girlfriends had C-sections, I never thought to seek their advice about what to expect after having one.

“At least I won’t pee on myself during labor,” I joked with my husband as I was being wheeled in to be prepped for surgery. (Bladder leakage became quite the problem during that last trimester.) A short while later at almost 3 a.m., our boy was born, and I was tired and medicated, unaware of what was to come after the pain meds started wearing off. 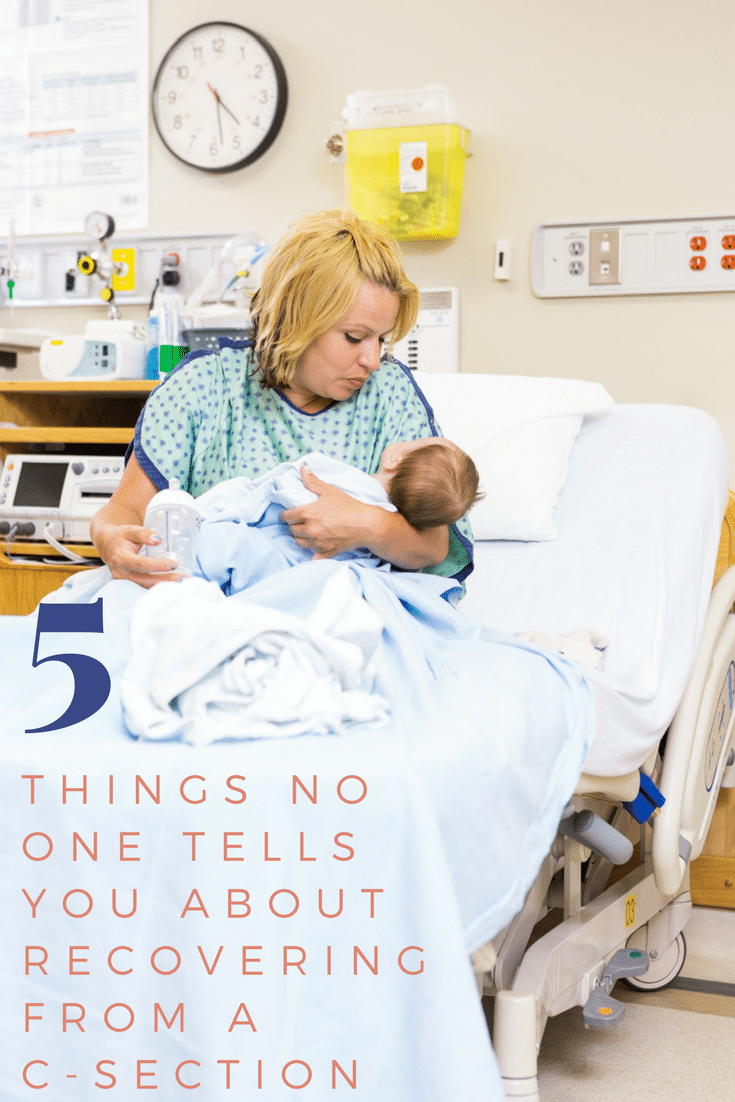 Things Your Friends Never Told You About C-Sections

Ladies, I was cold to my bones in recovery. I shivered so badly I thought I’d fall off the bed. I asked for a blanket, and the nurse kindly explained, “It’s an after-effect of the spinal. It’ll wear off soon.” Mine took quite a while longer to wear off than normal. And after piling five (yes, five) heated blankets on me and telling me they didn’t have any others, I was finally starting to feel warmth again. It took about five hours for me to be comfortable with only a couple of blankets.

You’ll Still Experience Vaginal Bleeding After Your Baby is Born

I’m embarrassed to admit this, but although I knew there’d be several weeks of bleeding after delivering vaginally, I didn’t expect it to happen with a C-section. Why? I can’t really explain, but my reasoning was that my vagina wasn’t involved, so I assumed all the “icky” stuff would be removed during the surgery. I know… you’re probably rolling your eyes right now. But this wasn’t the plan, remember?

When the nurse came by the next morning, I asked if my catheter could be removed so I could try to walk and take a shower. “Sure, I’ll just get what I need to clean you up.” Huh? She removed the catheter, came back with a peri bottle and dry cloth, and remarked, “You’re doing great! Not much blood at all.” The poor dear helped me stand up slowly… oh, so slowly… and then WHOOSH! Blood everywhere on the floor. I was mortified but told that it’s not the first time it has happened. So don’t be alarmed or surprised if the same happens to you.

I’m not going to lie – I experienced some bladder control problems during my pregnancy, but I knew that it was because the baby was pressing on my bladder. It’s just par for the course, in other words. I also understood that many women experience leakage after a vaginal birth, because, hello… you’re squeezing a tiny human through there! But I was flabbergasted to find out that women experience urinary incontinence even after C-sections!

The first instance happened a day or two after surgery. A sneeze came out of nowhere, and so did a little spritz. Ooops. Weeks later, it still happened with some sneezes. And even 3 1/2 months later when I got the flu, I still suffered from the sneeze ‘n spritz… except it happened when I coughed, too.

So not only do C-section mamas experience pain when sneezing and coughing, but you have to worry about tinkling in your seat, too. Ugh!

You’ve probably been told how to do Kegels to combat bladder leakage, but let’s be honest: What sleep-deprived new mom has the mental energy left to remember to do them? I know I didn’t.

Luckily for new moms, an over-the-counter pelvic floor device is now available to automate kegel exercises. It’s called the ApexM, and it doesn’t just treat stress incontinence; it cures it. You know what that means, mama? You don’t have to wear a bulky pad every time you catch a cold or cough after having your baby. It’s not invasive; you don’t have to take pills. It’s a simple, painless device with no side effects that you use for 10 minutes, six times a week, for 12 weeks. Easy peasy. 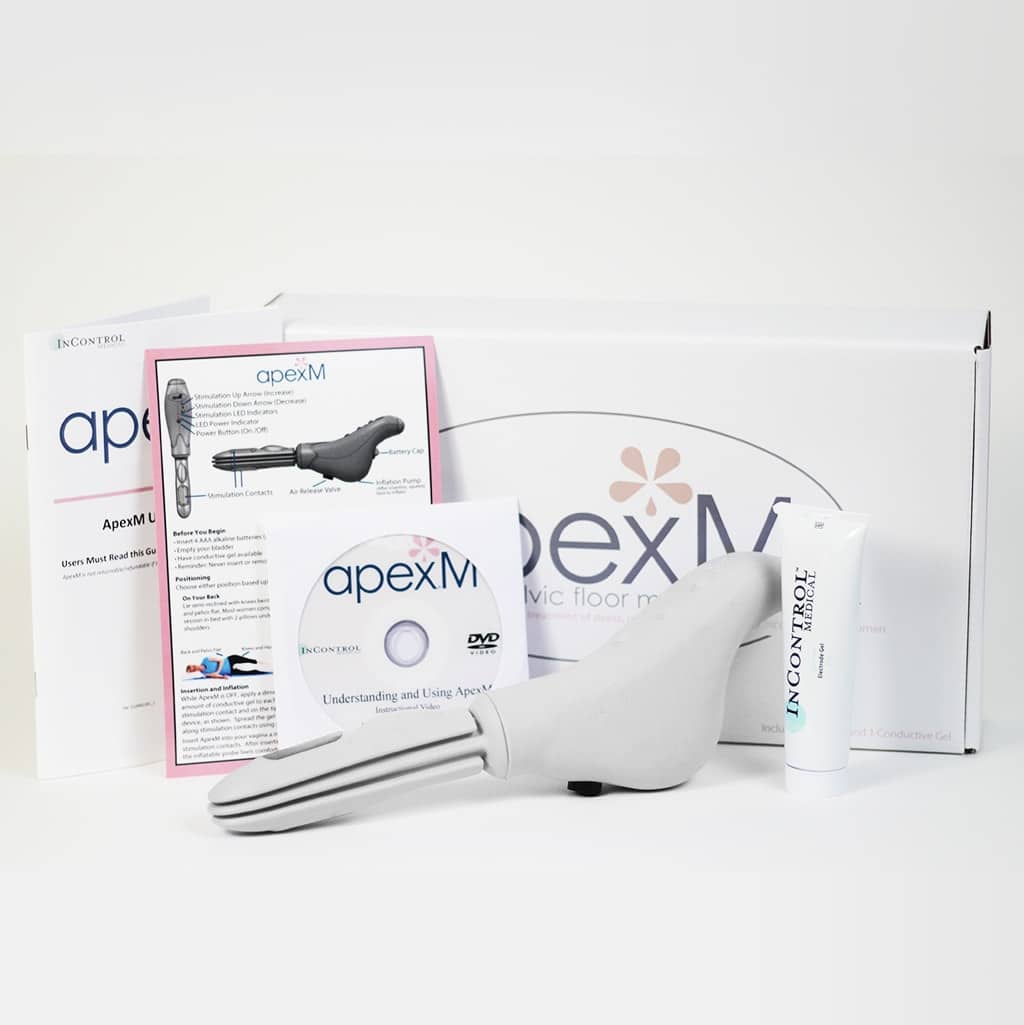 Your Scar May Always Feel Numb

I’ve had a few scars in my lifetime, so I expected this to be like all the others – sore while it heals but then back to normal. Nope. Once the staples were removed and my scar had healed completely, it was numb. I have no feeling on the scar at all and not much feeling in the area immediately surrounding it. I thought that sensation would return eventually, but it never did. Five and a half years later, that site is still completely numb.

Another big realization post-cesarian was that I relied on core strength much more than I ever realized. I couldn’t get out of bed by myself. Walking hurt. I couldn’t bend over. Driving was forbidden. You’re told that you can’t even lift anything heavier than your baby! That’s so hard to get used to. My advice? A recliner is your best friend. You can use your arm strength or legs (just avoid the core) to adjust the chair, so it’s where I slept for two months following my C-section.

Did you have a C-section? What surprised you after the procedure? More importantly, what tricks can you share with our fellow C-section moms to make recovering a little easier? Leave a comment to share! 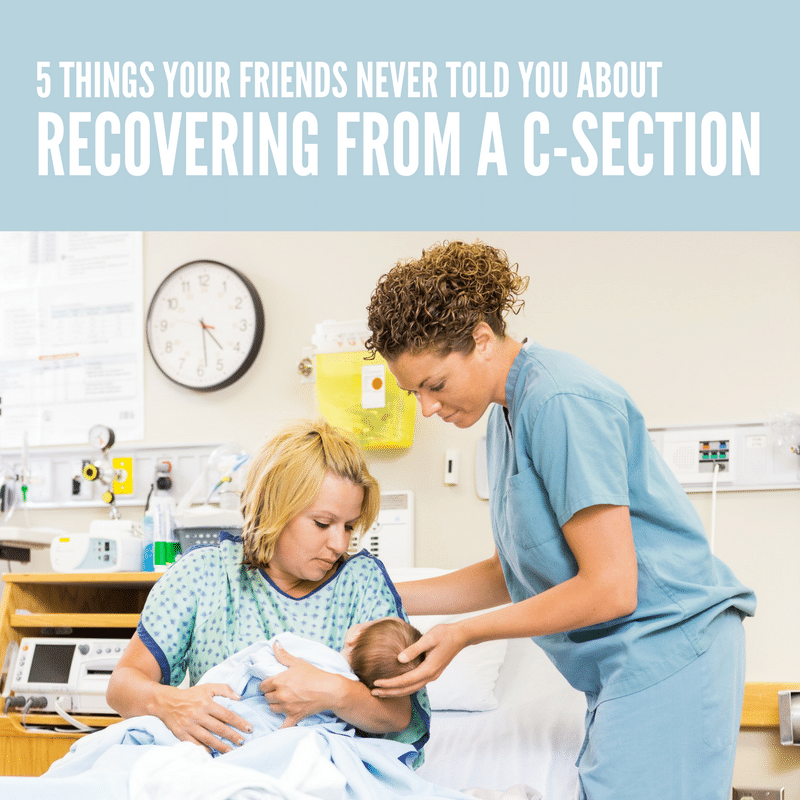 My daughter is a little over 10 months and when she cries (not the normal cry but the cry u know somethings wrong type cry) it literally feels like i just got cut open again !!! It is the sharpest pain i have ever felt when she first did it in the hospital i would bleed 10x heavier then i already was!! Also i was in the hospital alot longer becuse i was allergic to the epidural

Oh my goodness... what a nightmare being allergic to the epidural! I've never experienced those sharp pains myself (like you're describing), but I have a friend who says the same thing. Mine is still numb over 6 years later. No feeling in that area whatsoever.