Skip to Content
This post may contain affiliate links which means I receive a small commission at no cost to you when you make a purchase. As an Amazon Associate, I earn from qualifying purchases.
1416 shares 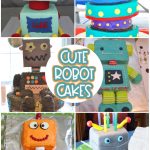 Our kiddo is turning four soon, and he decided that he wanted a robot birthday party this year. Well, actually, he’s only concerned about the robot cake. The cake does make the party, after all. Of course, I looked to Pinterest for inspiration. Here are some of our favorite robot cake ideas.

I found all sorts of robot cakes, from those that would definitely require a professional cake decorator to make to some super simple ideas that most people could pull off. You’re sure to find a cute robot cake recipe no matter what your skill level. And if not, you’ll find a cute picture of one to take to your local cake maker. 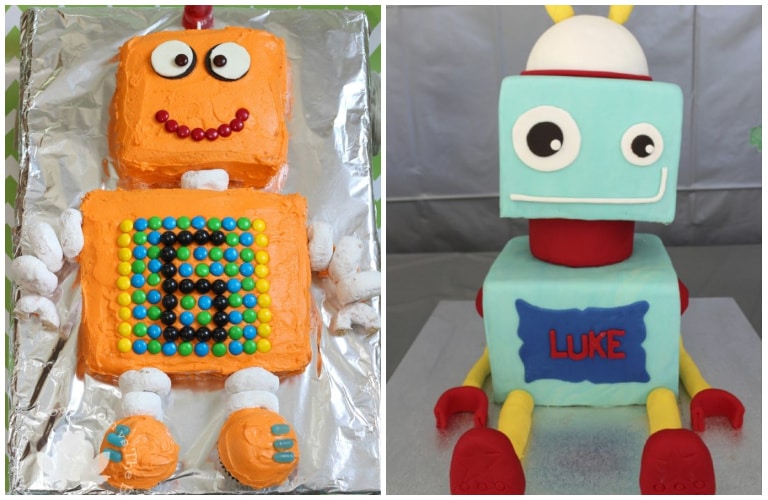 Note: This roundup originally had 22 robot cake ideas when first published in July 2015. The post was updated on 6/7/2021, and some of the websites and their beautiful cake pictures no longer existed, so those were removed.

We’ve included a mix of totally doable cakes and some for advanced bakers. Honestly, I’m neither. Even my basic sheet cakes are a little uneven, so I’ve passed the cake-making duties on to my friend Sandy. We’ve settled on a version of the gray sitting robot cake above, but she’ll add her own unique touches to it. I’m excited to see what it will look like!

Update: This is what our robot cake looked like. Since it was already heavy with the body layers, she made the head out of a cardboard box. Turned out pretty cute! 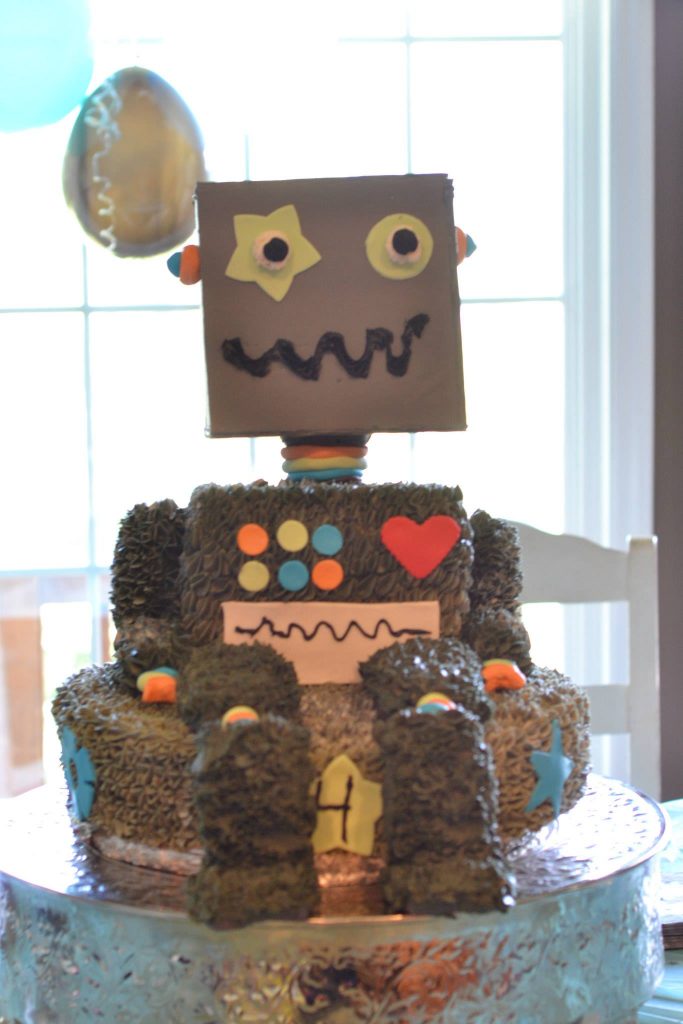 And if you’re the type who likes a video tutorial, here’s a totally doable robot cake idea similar to the orange one we posted below. The rest of the robot cakes are below the video! 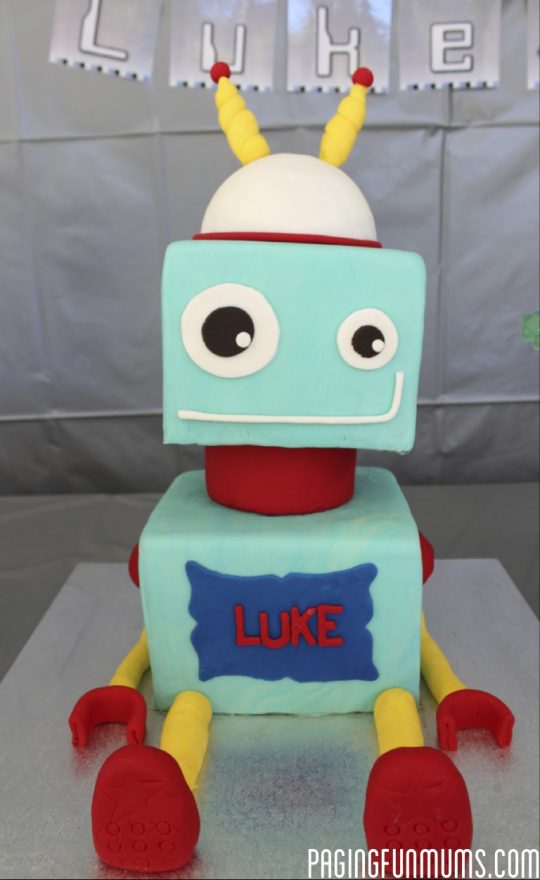 This light teal robot cake is totally adorable. We love that his eyes are different sizes, his silly smile, and that the child's name is on the "screen" on his body. This was a professionally made cake, and it shows! So cute! 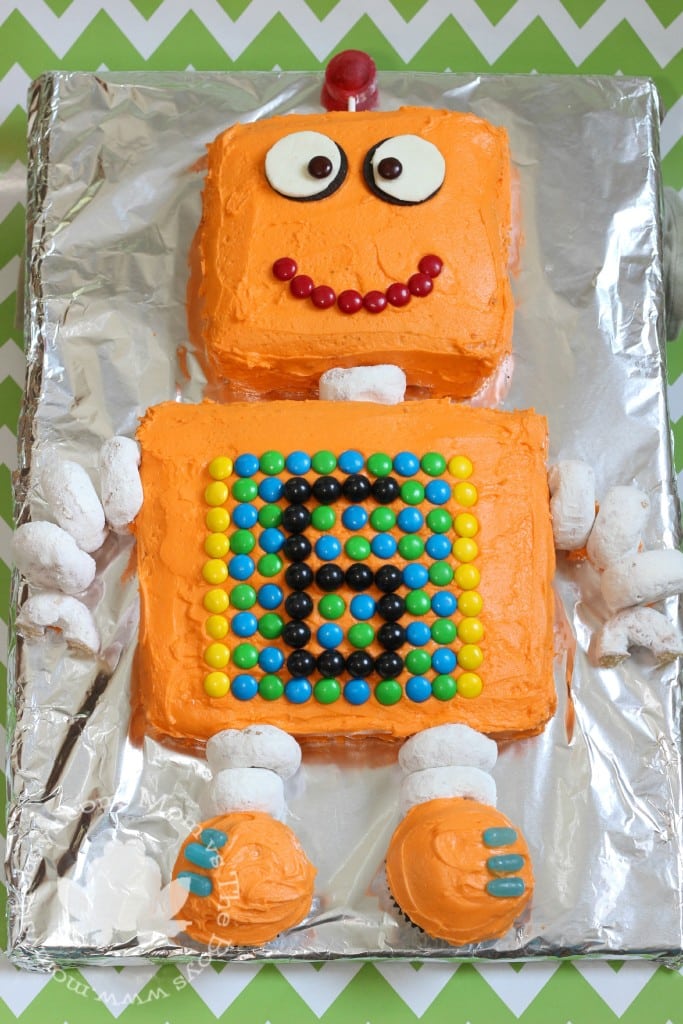 I just love this easy, approachable cake. Use whatever cake mix you like, dye some frosting, and decorate with candies and cookies. The donut arms and legs are a genius idea! It really looks like the accordion-type tubing on a robot. 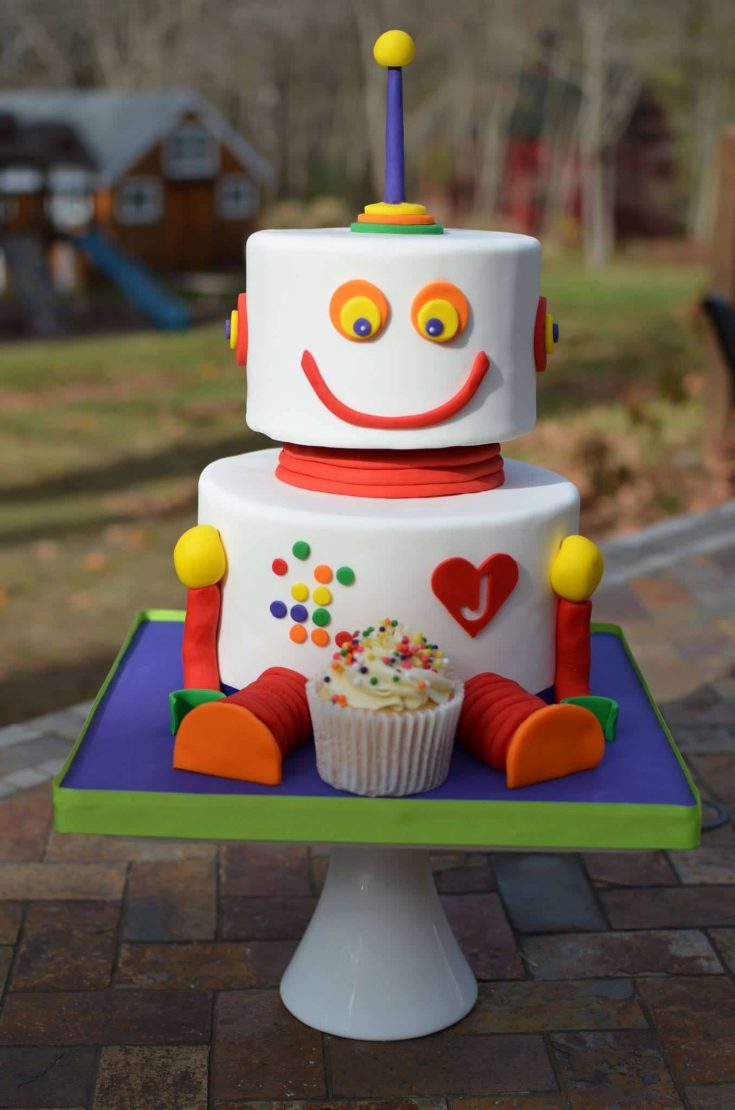 White Robot Cake by But a Dream Custom Cakes

How adorable is this robot cake? The white head and body of the robot really helps the rest of the colors for his accessories stand out. Providing a cupcake as a smash cake is also a great idea. 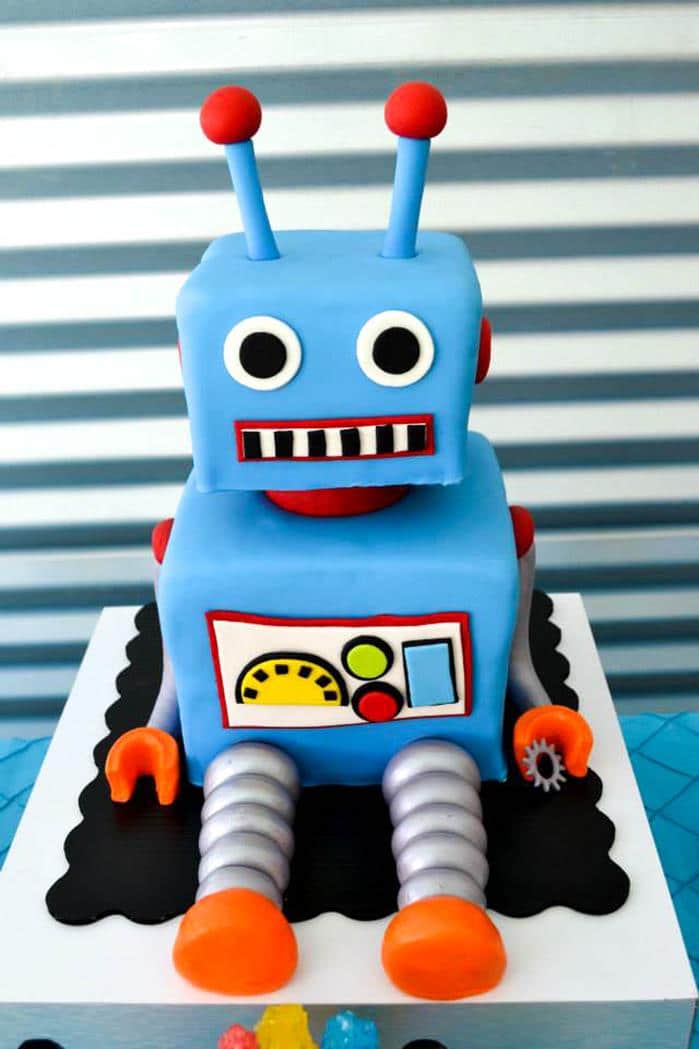 This light blue robot cake is a cutie. We love the black and white alternating on his mouth like a little screen, as well as all the fondant gizmos and gadgets on his screen. They also served cupcakes with gear toppers, which is super convenient and goes along perfectly with the robot theme. 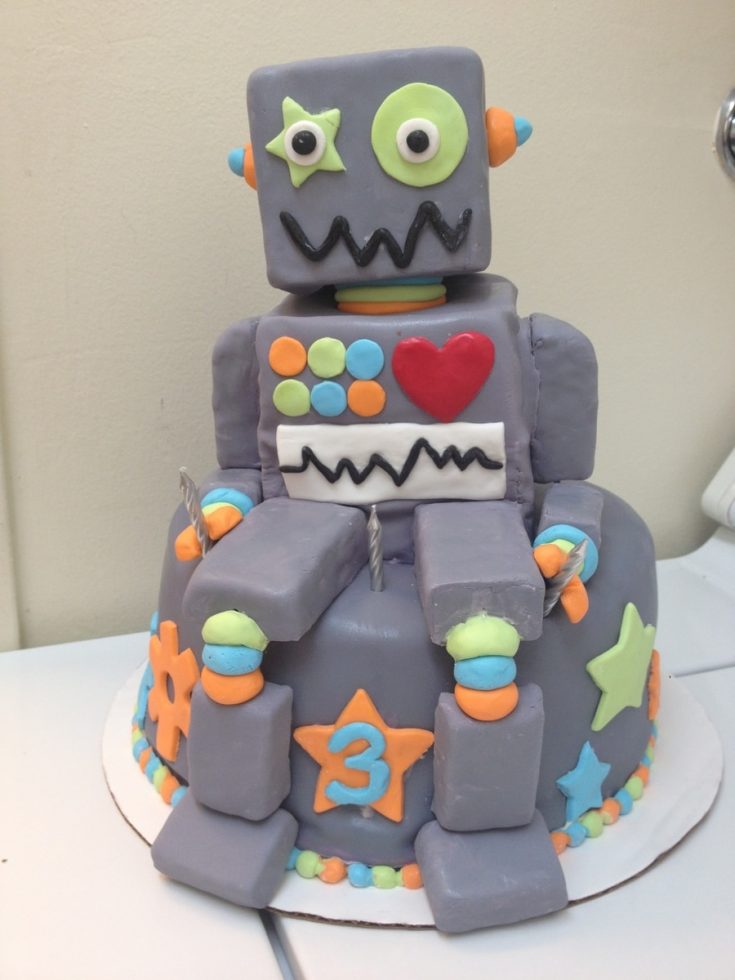 This is the one that we modeled my son's cake after. To make it easier, my friend and cake maker made the robot's head out of a box to make it lighter since the cake itself was quite dense and heavy. But whomever made this cake is very talented indeed. We love the star accents on the cake and on the robots eye as well as all the fun stuff on his "screen." 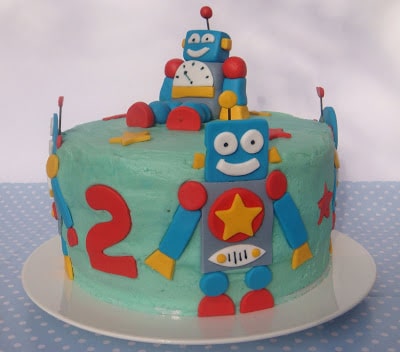 This darling little cake was a vanilla butter cake topped with vanilla buttercream frosting dyed a pretty teal color. The numbers, stars, and robots were made with fondant. 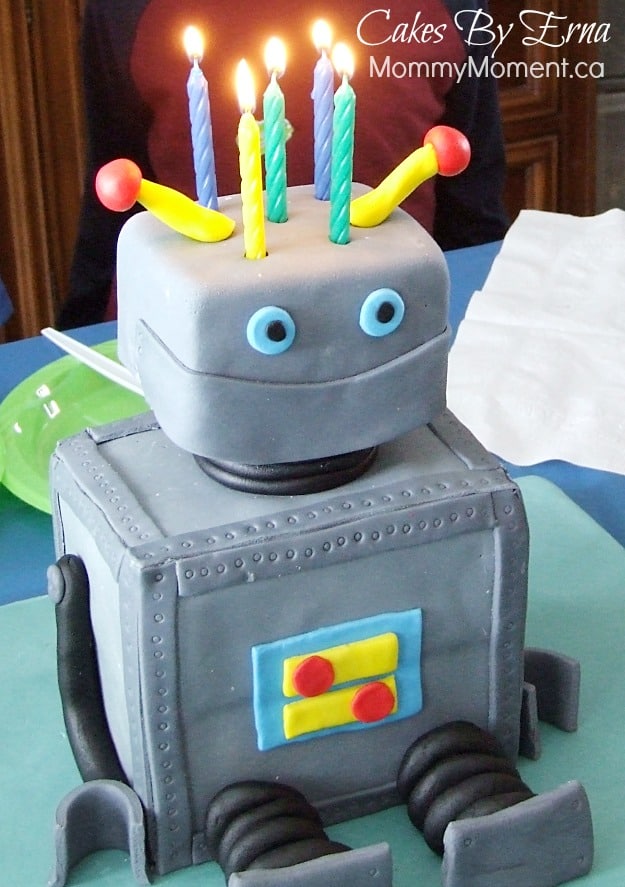 This darling little robot is too cute for words! Don't you love how the head has space for all the candles? It looks amazing all lit up. 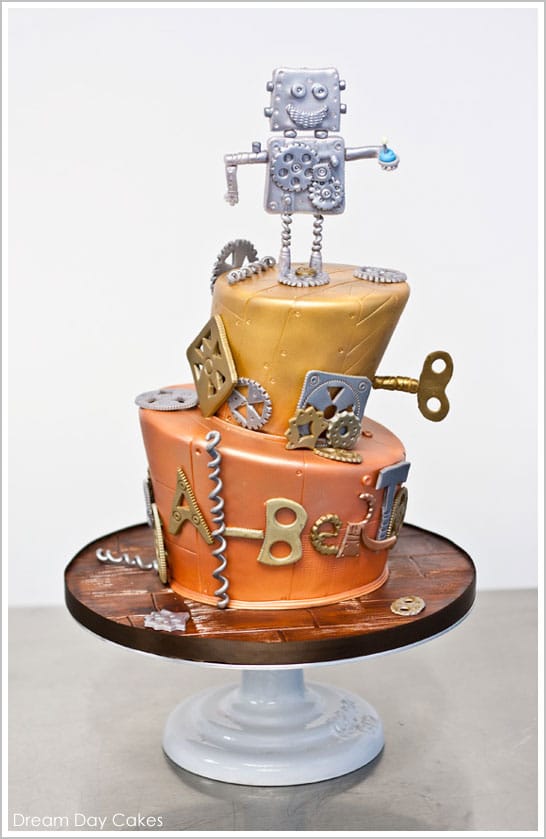 This fabulous modern robot cake was made by Yeni Monroy at Dream Day Cakes®. All the nuts, bolts, gears, and screws look so true to life. And did you notice that the robot is holding his own little cupcake? Amazing! 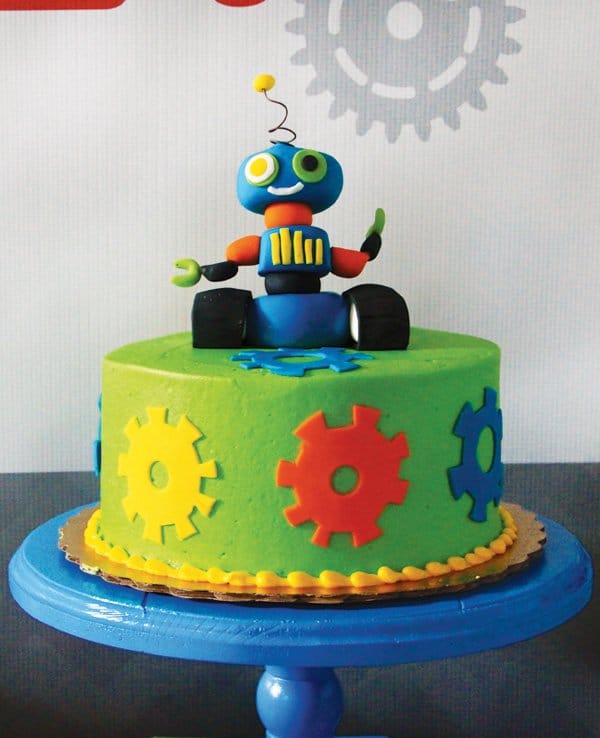 This robot cake by Dewey's Bakery is super colorful and fun! It also seems a little more doable by a non-pro although the cake looks like sheer perfection. The gears on the side and the cake are in bright colors. The blue robot on wheels is totally adorable and almost looks like a toy instead of something you can eat. Love it! 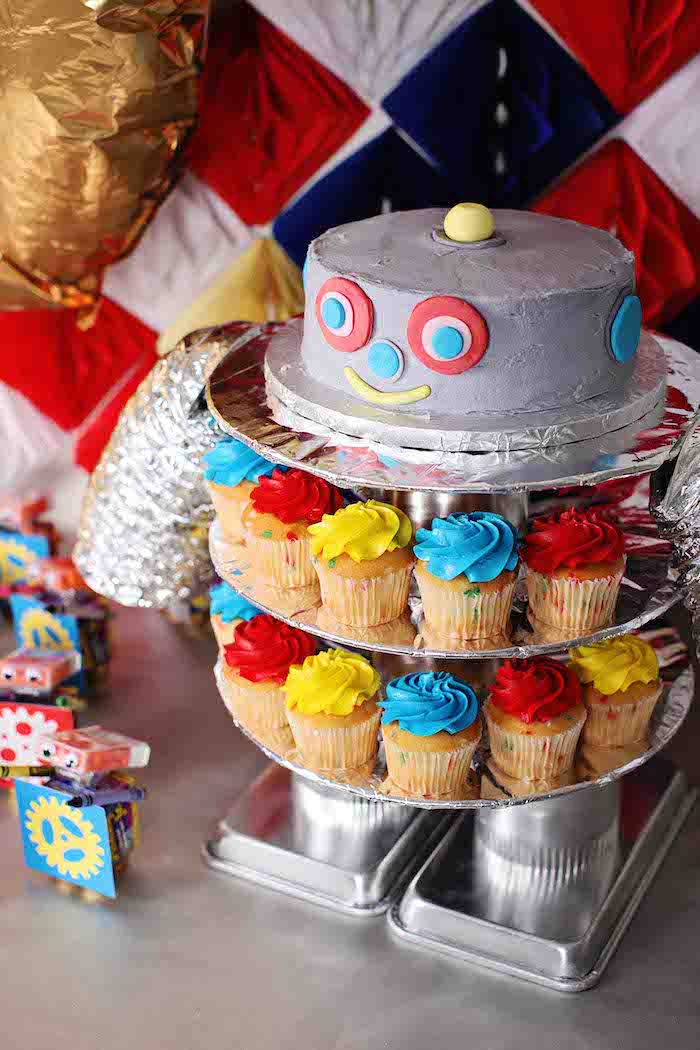 Now THIS is a totally doable and totally cute idea. Arrange colorful cupcakes on a cupcake stand, and make the top layer the robot's head. The arms look like they're made of dryer vent ducts, which is just brilliant, and the feet are smaller cake pans. 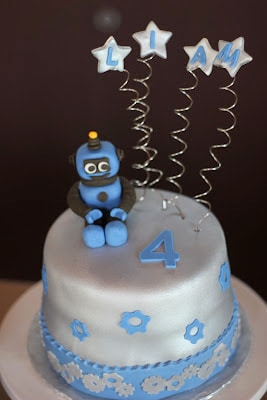 If you're planning a small celebration, a small robot cake like this one is the way to go. Then, the rest of your guests can have cupcakes, which are much easier to dish out than slicing a cake. This robot cake was made with chocolate and vanilla layers, with toasted marshmallow frosting in between. Doesn't that sound amazing? 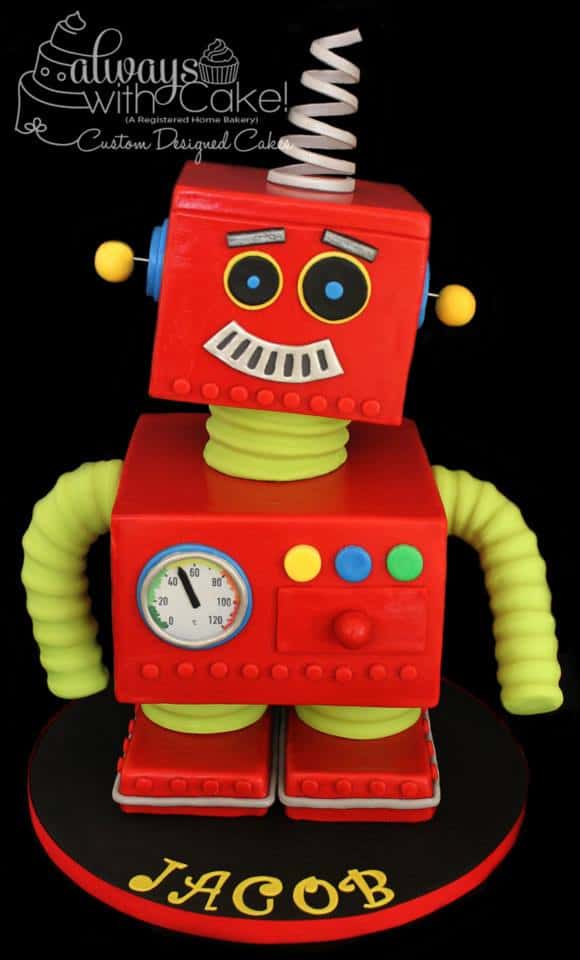 This red robot cake truly looks like a toy it's so perfect. He stands 21 inches tall with styrofoam arms and fondant and gumpaste accents. 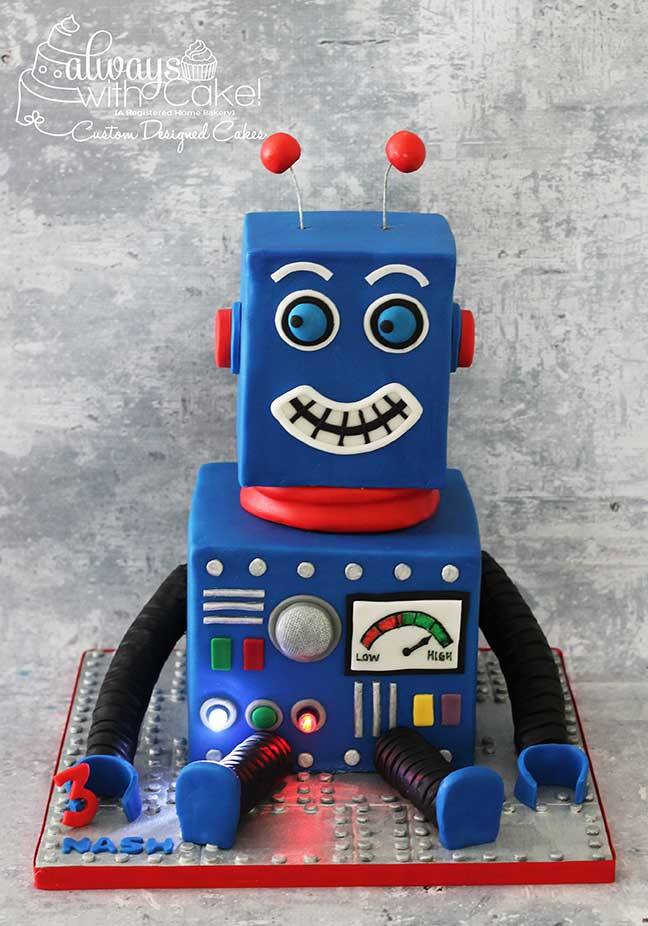 Max the Cake Robot by Always with Cake in Phoenix, AZ

Here's another fantastic creation from Always with Cake. This robot has WORKING LIGHTS, rice krispie treat arms and legs, and a totally mischievous look. A lot of work went into this cake, and it shows. 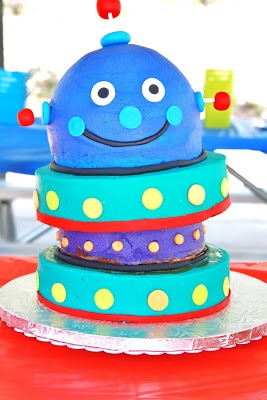 How fun is this topsy-turvy robot cake with wacky layers and colors and a big smiling robot face? 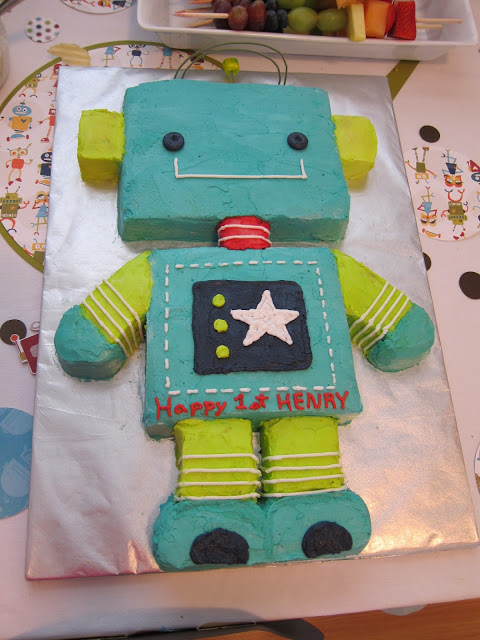 Here's another simple robot birthday cake idea that seems simple to pull off using basic cake pans and decorating skills. Any kid would be lucky to have this robot cake! Made with love. <3 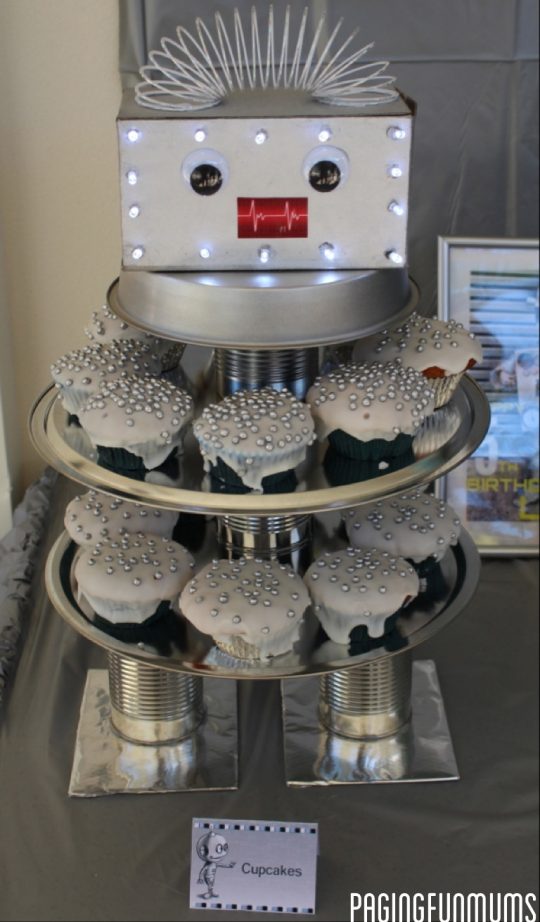 If you want to keep the cake decorating to a minimum, try making this DIY robot cupcake stand by Paging Fun Mums instead. Add silver cupcakes, and voila! You have a robot cake that looks fabulous.

Which one of these cakes is your favorite? 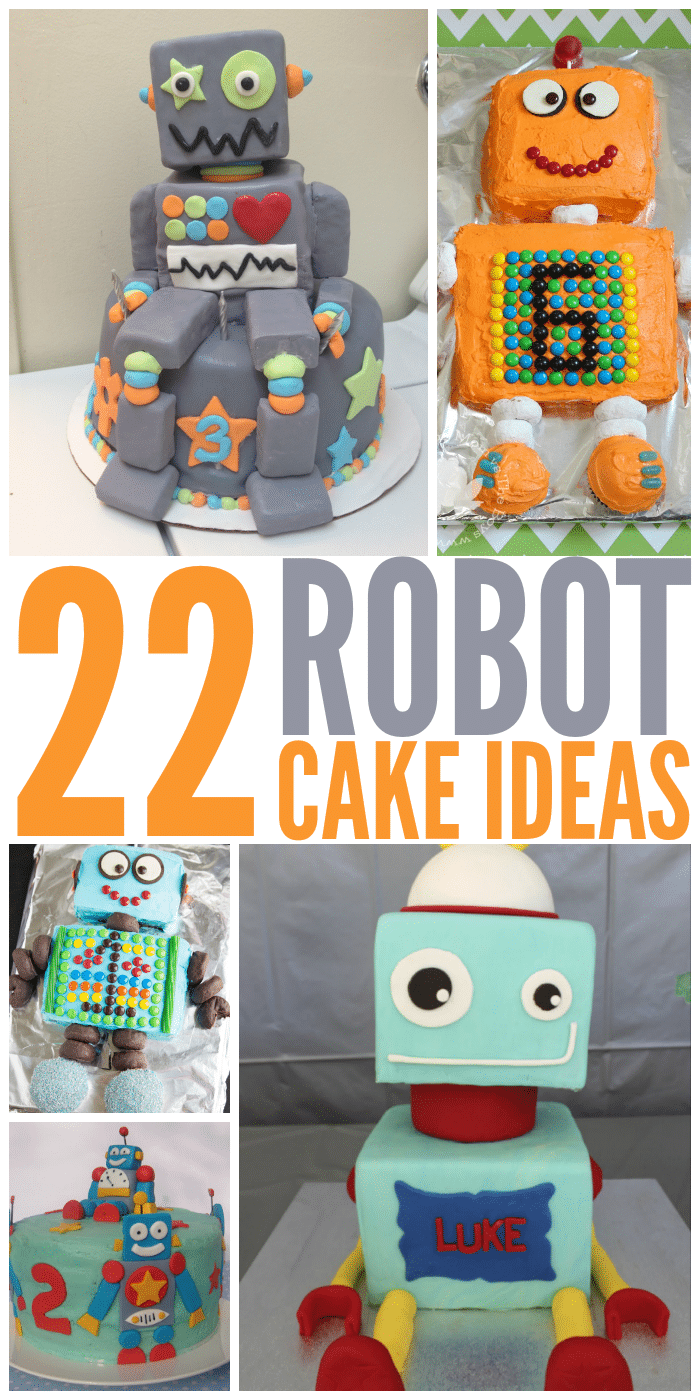 […] for robot party ideas? Check out the robot cakes roundup we put together. For more toilet paper tube crafts, try our cardboard […]